Scotland’s elected First Minister and leader of the Scottish National Party (SNP), Nicola Sturgeon, addressed the Scottish Parliament on Tuesday at the same time as the pantomime politics of Westminster got under way to elect a new Speaker and swear in newly elected MPs.

The British Parliament is stuck in an ancient time-warp of flummery, buffoonery and pomposity. Black Rod, doffing of caps and seeking permission from an unelected chamber to establish a parliament in an elected one confirm Britain’s place as a cesspit of inherited privilege, wealth and power protected by an Establishment based in Westminster but with tentacles in newsrooms and boardrooms all over the UK.

The British Parliament is a symbol of Britain’s extensive, bloody and brutal past. It is not a modern democratic institution but a malleable device of the powerful deployed to defend an unwritten constitution and an unelected and unaccountable monarch. It is ripe for consignment to a museum.

The contrast with the proceedings 400 miles away in Holyrood, the Edinburgh home of Scotland’s Parliament, could not be starker. As Boris Johnson was prancing around from the Lords to the Parliament Chamber with a spoiled brat grin befitting an individual who had just survived a deserved electoral mauling thanks to the concerted efforts of the billionaire owned and controlled media who conspired to cover up his multiple sins and ensure his opponent was effectively crucified and destroyed while he was artificially promoted and pampered but could still only muster a meagre 1% increase in support, the grim reality of his democratic kicking was spelled out eloquently.

Nicola Sturgeon outperformed every political leader across the UK during the election campaign and won the right to make her assured statement to the Scottish Parliament today. It is worth quoting extensively as it will most likely be ignored by the anti-independence media in the UK:

“The election was comprehensively won in Scotland by the SNP.

Indeed, you have to go as far back as the election of Ted Heath in 1970 – the year I was born – to find a party that got a higher share of the vote across the UK than the SNP did in Scotland last week.

That is, by any measure, a significant vote of confidence. I and my colleagues will work each and every day to repay the trust that has been placed in us.

It was also an endorsement of our election message – that Scotland does not want a Boris Johnson government and we don’t want to leave the EU; and that, while opinions may differ on the substantive question of independence, we do want Scotland’s future to be in Scotland’s hands.

By contrast, while the Conservative Party won a majority UK wide, they were once again heavily defeated here in Scotland, having fought the election on the single issue of opposition to an independence referendum.

They lost not just vote share, but also more than half of their seats.

In fact, the Conservatives have now lost 17 consecutive Westminster elections in Scotland – stretching back to 1959.

But in spite of that, we face a majority Tory government implementing a manifesto that Scotland rejected”.

Tories Have Not Won in Scotland for Sixty Years

Let that information sink in for a moment! In 17 consecutive Westminster elections, seventeen, the Tories have lost in Scotland!

You have to go back sixty years to find the last time the Tories were able to convince Scotland to support them. This December election was a particularly spectacular rejection of their right-wing and reactionary platform. 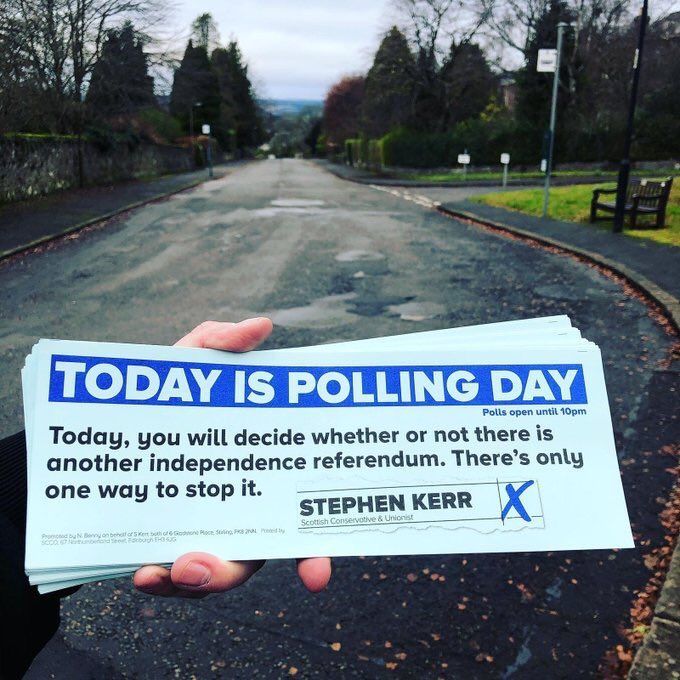 They sought to fight on one issue and one issue only. Brexit was not mentioned by Scottish Tories. They could hardly parrot Johnson’s dishonest, but effective, mantra ‘Get Brexit Done’ in a country that voted decisively by 62% against Brexit. So they highlighted the issue of IndyRef2 at every opportunity and on every poster, leaflet and broadcast. The Election Day leaflet they distributed at every polling station where they could find individuals low enough in intelligence or moral substance to physically distribute them could not have been clearer:

“Today, you will decide whether or not there is another independence referendum. There’s only one way to stop it.”

That message was consistent and clear. If you want to prevent another independence referendum then vote Conservative. They got their answer emphatically. They lost votes, vote share and over half their seats, from 13 of the 59 available to only 6.

Scotland’s Tories Fought on One Issue and Lost

What is now outrageous and thoroughly despicable and dishonourable is the very same Tories, like interim leader Jackson Carlaw, who fought the whole election campaign on the issue of opposition to IndyRef2 and claimed at every opportunity that all the SNP were concerned about was yet another ‘divisive’ referendum now claim there is no mandate for that IndyRef2 vote… It is pathetic, undemocratic and unsustainable.

Johnson and his Tory minions in Scotland claim the victory in England is a mandate for Brexit. I agree. So does Nicola Sturgeon. Sadly and unfortunately for millions of poor, vulnerable and low paid workers the Tories won the election. It was not a resounding endorsement of Johnson or his policies as the vote share increased by only 1.2% but Labour’s vote dropped sharply as over 2.5 million voters from 2017 abstained completely or turned to the Brexit party.

In general election, the Conservative Party won an absolute majority in the House of Commons. The Scottish National Party (SNP) also showed good results and increased the number of seats in the regional legislature

Only a small minority of Labour’s lost voters turned to the Tories. The turnout last week in England was down 1.7% from 69.1 two years ago to 67.4% last Thursday. The issue of Brexit was critical to many who had voted Leave in 2016 and believed Labour would honour that vote as it said they would in their 2017 manifesto. Sadly for Corbyn that particular commitment was dropped and many working class voters felt betrayed.

Yet Johnson’s 43.6% vote share is widely accepted as a mandate for Brexit. His vote share only increased by 1.2% as I previously noted but it translated into 56.1% of the available seats. He claims it is a clear mandate for his ‘Get Brexit Done’ clarion call. However the SNP increased their vote share by over 8% as the proportion of voters increased from 2017, from 66.5% turnout to 68.1%.

At long last even some of the staunch unionists within the Labour Party and Trade Union movement in Scotland are feeling compelled to admit that the SNP’s stunning electoral victory is a democratic endorsement of IndyRef2 which simply cannot be ignored any longer without losing the last vestiges of already sparse credibility.

The Johnson attack across the UK and Jackson Carlaw attack in Scotland was consistent and clear. They said a vote for Labour anywhere in the UK was a vote for two referendums in 2020 as a Corbyn government would permit a second independence referendum in Scotland and another EU referendum across the UK. They repeated that claim as a high profile warning ad nauseam. Jeremy Corbyn was consistent that the Scottish people should have the right to choose the timing of another independence referendum although he personally did not see it as a priority should he be elected PM.

In other words the mandate for IndyRef2 in Scotland is not reduced to the 45% who voted SNP and romped the contest but must also include the 18.6% of voters who backed Labour. Everyone who voted Labour in Scotland last Thursday knew their party accepted the right of the Scottish people and Scottish Parliament to decide the timing of IndyRef2. Therefore support for the basic democratic principle that Scotland should have the right to decide Scotland’s future is clearly in excess of 63% of the voting population. That is a massive and irresistible mandate.

Of course, those who recognise the democratic principle that it is Scotland’s right to choose the timing of the next referendum may not necessarily vote for independence. Those are two separate arguments. The first has been endorsed emphatically. The other is still to be won. However, faced with Johnson’s hard Brexit, or even No Deal Brexit, and a significant 80 seat majority for his right wing agenda over the next 5 years it is clear that many progressive unionists who rejected independence in 2014 will be absolutely compelled to change their minds now. That is why the SNP must proceed with gusto to inform Westminster that IndyRef2 will be held next August or September and Westminster will be expected to respect the democratic outcome of that vote despite their opposition to Scotland’s freedom. I have never been more convinced than ever that support for independence will rise beyond 60% next year and in all probability will reach as high as 65% when the arguments and stark choices are presented and distilled.

The All Under One Banner independence group has announced plans to hold an independence march and rally in Glasgow early in 2020 following on from the General Election result. The event will take place on January 11th. That march has to be the biggest ever. 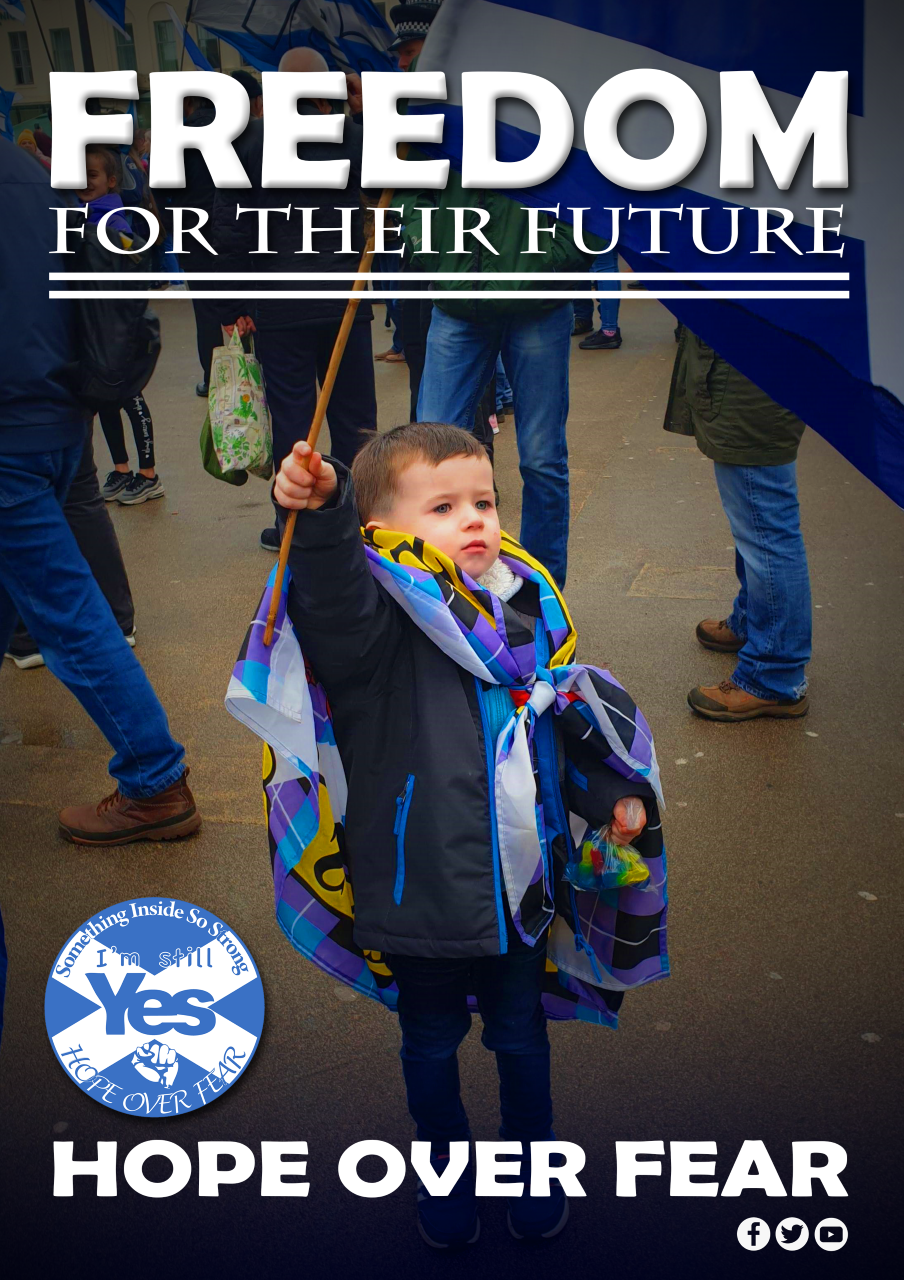 I call on everyone who supports either Scotland’s right to choose and/or independence to assemble like never before. Johnson may say ‘no’ now but we in Scotland must refuse to accept no for an answer.

As the First Minister said today:

“Given the nature of what we are facing in terms of UK governance, this is now a matter of some urgency – which is why this government wants people to have a choice next year.”

Absolutely Nicola… Bring it on.