Ignore the predictions of the unreliable and rigged opinion polls conducted primarily by organisations owned and controlled by right-wing Tory millionaires more intent on shaping opinions than reflecting them; this current General Election is very much in the balance.

A Jeremy Corbyn led government with SNP support for radical budgetary measures which significantly improve the quality of life and standard of living for millions across the UK is a very real possibility. The panic among the British ruling Establishment is tangible.

Several strategies were meant to guarantee Corbyn and his radical wealth redistribution policies were strangled at birth. The powerful mainstream media across the UK almost exclusively owned and controlled by six individual billionaires and their corporations would promote Johnson as the only viable PM, portray Corbyn as variously incompetent, dangerous, untrustworthy and anti-Semitic and ensure the election was primarily about Brexit in the hope Johnson’s ‘Get Brexit Done’ mantra would resonate among those who voted Leave in 2016. 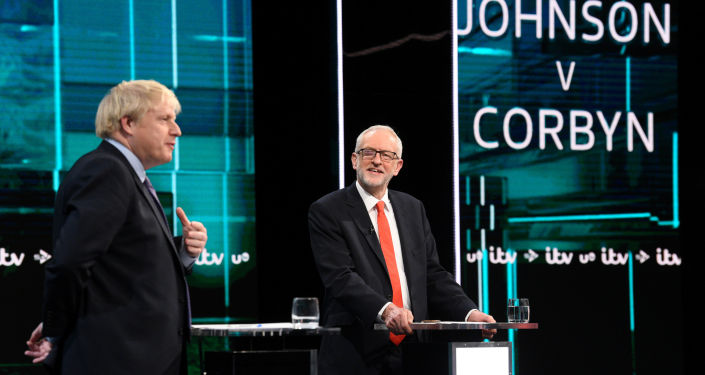 Giving as much gentle coverage as possible to Jo Swinson, the Lib Dem leader would assist that sub-strategy by representing her as the safer option for EU Remainers who might contemplate endorsing Labour’s confirmatory referendum plan.

However at the halfway stage in this clearly volatile December election the best-laid plans of the British ruling class are unravelling and compelling them to resort to even more desperate measures. The more the general public gets to see, hear and compare the personalities and associated policies of Johnson versus Corbyn the more they realise how vacuous Johnson really is and how deceit and downright lying is second nature to him. His inability to empathise with real people in Yorkshire as they witness the destruction of their homes and belongings submerged in flood waters was clear to all and had to be edited out of as many bulletins as possible. His inability to properly use even a mop underlined his spoiled brat, millionaire rich boy status.

The 40 new hospitals fib (enough money for only 6 has been announced) is repeated ad nauseam despite it being debunked by all independent analysis but undeterred, he pipes up about a National Insurance change which will put £500 in the pockets of the low paid. The reality is a saving of no more than £85. A lie or rank incompetence?

Then a manifesto launch lighter than a feather as far as new commitments are concerned but avoiding any traditional Tory tax cut pledges for their rich base is promoted with a single popular headline – 50,000 extra nurses to be recruited for the NHS. Sounded good. Certainly needed. But within hours we learned that the 50,000 “new” nurses only add up if 18,500 existing nurses don’t leave the profession… So it’s not 50,000 new nurses at all. It’s actually 30,000 at most and hardly matches the losses over the last ten years of austerity enforced cuts. Another lie or simply more incompetence?

The combination of Johnson’s shallowness being exposed by closer public scrutiny, Jo Swinson being revealed as the wholly untrustworthy and nuclear bomb happy Yellow Tory she is; and Corbyn’s public ownership and living wage proposals being well received has caused panic at the highest levels within the British Establishment. That panic is particularly evident within the quintessentially pro-Establishment British Broadcasting Corporation, the BBC.

On 10 November, the prime minister laid a wreath, to commemorate the millions of people who’ve died in wars, upside down. Instead of holding Johnson to account for the insult, the BBC broadcast archive footage of Johnson laying a wreath in 2016. Apparently this was an innocent ‘mistake’. How daft do these people think we are? Someone sitting in an editing suite at BBC HQ ‘mistakenly’ cut and pasted footage of Boris Johnson at a Remembrance Day Memorial THREE YEARS AGO and slotted it into the 2019 news bulletins… As mistakes go that has to be one of the most contrived and skilled ever.

Then only days ago another innocent ‘mistake’ was made by the BBC as they managed to edit out the loud and concerted chorus of laughter that greeted Johnson as he was asked whether he was worthy of public trust. It was an utterly defining moment in the Question Time style leader’s debate broadcast last Friday evening on the BBC. Johnson was toasted by real people with real concerns about the consequences of ten years of Tory government austerity. His waffling piffle cut no ice and he floundered on the stage. The loud laughter that accompanied the trust question finished him off. Yet incredibly by the next day the footage of that defining moment in the debate was edited out by the BBC so that viewers watching the Saturday bulletins concerning the previous night’s debate were prevented from witnessing the loud laughter directed at Johnson as he pleaded to be trusted.

Imagine this was a report from Russia or China about the public openly mocking a political leader with loud laughter but a public broadcaster decided to edit it out? It would be seized upon by Western politicians and media as conclusive proof that the broadcaster was not independent in any shape or form but actually a stooge of the state. That is precisely the accusation which the BBC can now not deny. No broadcast editor with an ounce of skill, experience or integrity would edit out the most significant element of a news report about a debate unless they were specifically instructed to do so by their boss. This was no ‘mistake’ as the BBC now pathetically protests but rather further evidence of the BBC’s pro-Tory and anti-Corbyn bias. Watch for yourself the result of the unethical actions of the BBC.

None of this should come as a shock to readers of my columns. I have highlighted such pro-Establishment and status quo bias within the mainstream media in many articles. Don’t forget the collusion among all the broadcasters which ensured Johnson being literally booed and jeered out of the Addenbrooke’s hospital on the 31st of October by ordinary NHS staff and patients was hidden from public view. If it wasn’t for alert individuals with available mobile phones such realities would be covered up completely.

With the faltering of the original strategies we now have the mainstream media falling back on old attack lines to try and undermine Corbyn and make him appear unelectable. The raving and ridiculous ramblings of a right-wing Jewish Rabbi, Ephrain Mirvis, in a right-wing Murdoch owned newspaper, The Times, are today accorded the status and coverage of landmark, remarkable or historical respectability. They are nothing of the sort. The Chief Rabbi in question is on record as considering Boris Johnson a close personal friend who he welcomed as the new Tory leader and PM in July.

Shameful GE19 intervention by unelected Chief Rabbi who does NOT speak for all UK Jews. GE19 is a 2 horse-race: Johnson’s party of Go Home vans, racist insults, links to antisemites and Islamophobes in Europe v radical reforming Labour. Where is the Chief Rabbi’s moral compass?

​This is no level headed, independent religious leader this is a rabid right-wing individual who is proud to record his friendship with an individual famous for racist and sexist comments and an inability to tell the truth.

The comments of Mirvis should be seen as what they are. Politically motivated without a base in fact or reality deliberately promoted by the mainstream media and press to try and undermine Corbyn personally. The authentic view of Jeremy Corbyn in relation to antisemitism was reflected by his long-time Tory opponent in the Houses of Parliament, the Jewish former Speaker of the House, John Bercow. His words deserve much more coverage because they are much more credible and real from a man who has known Corby for many years:

“All I would say is that, yes, it is an issue and it needs to be addressed, but I myself have never experienced anti-Semitism from a member of the Labour Party. Point two, though there is a big issue and it has to be addressed, I do not myself believe that Jeremy Corbyn is anti-Semitic. That is my honest view. You haven’t asked me explicitly, but you’ve nevertheless drawn me and I want to make that point. I am not saying that he doesn’t have a challenge in his party. It is an issue and it does need to be addressed and I respect those who are very concerned about it, but I don’t believe Jeremy Corbyn is anti-Semitic. I’ve known him for the 22 years I’ve been in parliament. Even, actually, when I was a right-winger we got on pretty well. He was quite a personable individual”

See the antisemitism attacks on Corbyn for what they are. Manufactured attacks on character created by the mainstream press and promoted by right-wing Jewish representatives rather than arguments of substance. Expect these and other baseless attacks to multiply in the next two weeks as the British Establishment desperately tries to further undermine Corbyn in England and Wales and Sturgeon in Scotland.

The easy victory for Boris the British Establishment hoped for is no longer on the agenda. People are smarter than the media give them credit for and millions of young people have specifically registered to vote. A Corbyn win in England and Wales and an SNP victory in Scotland is not what the rich and powerful want but it is what might happen nonetheless.